We've heard the views of scientists, like Hawking and his gang,

Who told us that God's universe was started with a bang.

But science knows that Stone Age men, from the dawn of history,

Fashioned gods of wood and stone, that they could touch and see.

Thus scientists and Stone Age men are on an even plane,

Since both have found the need to act on things they can't explain.

God tells us that His universe does not begin or end,

And that it's not for simple minds to try to understand.

So much for foolish scientists, whose pardon I must beg,

When they tell me they know which came first, the chicken or the egg.

"Pax Ney Loron" the emperor, of stature short and stout,

Some say it's just an anagram, not hard to figure out.

Master of the universe, no less would 'er suffice,

Fated for captivity; done in by fire and ice.

Then rose the master orator, the harbinger of doom,

To raise again his chosen race, from hopelessness and gloom.

Cold and ruthless is the one, whose name the prophets whisper,

Rising from obscurity, the child known as "Hister".

From pulpits all across the land, the watchmen sing their songs,

"Beware the coming antichrists!" (but both have come and gone).

The Image of St. Paul

The caller had seen Paul's image, displayed on chapel walls,

As a tall and handsome gentleman, with no defects at all!

The priest agreed these portraits, did not show any flaws,

And thought perhaps it was a limp that may have been the cause.

But wise men will remind themselves, lest they might forget,

That artists do paint images of those they've never met.

For St. Paul had travelled far and wide, and thus was oft' described,

As a "fat and homely little J**, with a patch upon one eye."

Click Here to order your copy of Edward Oliver's book 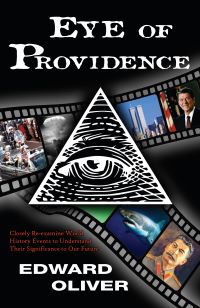